I Bought Full Carbon Fat Bike For Cycle Touring Why?

8 years ago I got into cycle touring after watching many cycle touring videos on YouTube. I decided on a full carbon Fatbike setup with Bikepacking setup rather than the traditional steel frame bike and traditional pannier setup. In 2012, I didn’t see anyone touring on a Fatbike. So why did I get Fatbike for touring when no one else was touring this way? There were a few reasons I went this route, even though people said it was a stupid idea.

The Plan Was To Get A Custom Titanium Frame Built.

The reason was that way I would have a frame light enough to build on. And the bike would be custom geometry fit for those long rides. Basically, the bike wouldn’t be cheap after they put all together, but it would be exactly what I wanted. The problem was when I asked a good friend about getting a custom frame built to fit me exactly, he just asked one question, “How long will it take for them to custom build your geometry bike frame?”. I Told him six months. His reply is the reason I decided against getting a customs bike frame. He said if the frame got damaged or the bike got nicked, would I be happy to wait 6 months to get a replacement while touring. Good point, better to get a brand bike easy to replace if needed.

The first thing I asked was, why people use a steel bike. The answer I got back was that it is easy to repair anywhere in the world. Any welding shop, and there’s one in every town, can repair it. I understood that 20 years ago, when people were touring and there wasn’t such a good logistic for getting replacement parts.  But with FedEx and lifetime warranties I can get my frame replaced in 4 days. Carbon is tough specially if the frame is made in Taiwan. In 8 years, never a problem and I beat the hell out of it; carbon is the new steel.

The second thing I asked was, why the bike has so many problems on tour. Just watch any world tour Youtuber videos: they’re fixing their bike or taking it to the bicycle shop for repairs. The main answer was the weight of all the gear, some people are carrying over 70 kgs. So if I bought ultra light gear, which is expensive but I have less weight on the bike, I could have fewer breakdowns in the long run. Especially the rear wheel problem, which most long distance cyclist come across.

Why are they still using large bulky pannier in 2012? My research showed to fit all the gear. I could understand the traditional thinking at the time in the 1970 or even 80s. I went camping with my dad as a kid or when I did my Duke of Edinburgh in 1986. Every bit of gear I had was bulky. My tent was 6 kgs, my sleeping bag was so bulky it would take up a 1/2 a backpack. If my gear is lighter and more compact, I could carry all the gear that a traditional cyclist takes. But taking up half the room and half the weight. Ok, it’s going to cost much more for ultra light gear but I don’t have to worry about more serious issues on the trails. And to be more independent is worth it to me.

A Bike That Can Handle Any Terrain.

Watching a lot of cycles touring videos, more people are going to remote places, i.e. you need a bike that can handle it. How many videos or photos have you seen of people with traditional cycle touring? Pushing their bikes through the desert or mud. To me it made sense to get a bike that could handle any terrain one designed to go anywhere.

I knew from day one, that I would do an international tour. If I was going to South American from Europe, I knew weight when traveling by plane can be expensive. Even if you’re doing a trip around the world you still need to get a flight from Bali to Australia and Australia to New Zealand to Japan to Alaska, etc..

I Want Ride All Year Round any conditions.

I knew from day one, that I would do an international tour. If I was going to South American from Europe, I knew weight when traveling by plane can be expensive. Even if you’re doing a trip around the world you still need to get a flight from Bali to Australia and Australia to New Zealand to Japan to Alaska, etc..

The final decision was weather of all seasons. I knew I’d be exploring trails and it would be winter so a fatbike can handle all weather including snow.

It make’s Prefect Sence to ride a Fatbike for touring.

More people are doing their cycle touring adventures with a Fatbikes nowadays. When I started there wasn’t anyone touring with a fat bike and full Bikepacking bags. If you ever look back at some famous Youtuber’s like Foresty Forest great western trail videos, or Iohan Gueorguiev, who made that amazing video, they all started on traditional touring bikes setups. Now they’re both switched to riding at Fatbikes just in the last 3 years. Welcome to the dark side guys. What took you guys so long?

Cost Of A full Carbon Fatbike “What the F#@k”

I have a lot of friends with some amazing bikes ranging from 2000 to 10000 dollars. Yes, crazy prices and they have not just one, they have many in the garage. Some have 5 bikes. Last time I bought a bike when I was a kid it cost $100, which to me was a lot. In 2012, I could have had a heart attack. Even bought a used car for the prices they want now. But that’s what it is nowadays. I knew I would never have over one bike because of my lifestyle and work, i.e. I lived and worked in a resort at the time and didn’t have a real home base. I am always traveling and working; I knew one bike was enough. And if I spent $6000 dollars that would still be less than my friends with 4 bikes. So that’s how I justified spending that much money lol.

After years of riding a fatbike is it the right choice

I bought a full carbon Lamere bike with all the top of the line parts. It has been amazing while other friends have had problems with things breaking while touring. I had to deal with a few punctures, replaced tires, 3 chains with over 18000 kms and that’s it. So yeah, it was the right choice to get a $6000 carbon fatbike for touring.

Any upgrades you Recommend.

I didn’t really upgrade anything; I added some additional parts. The last thing I got over 3 years ago was something I should have bought on the first day. The Infinity Bike Seat. What’s the point of spending money on an expensive bike and after 60 km your ass is sore. Best to invest in an Infinity Bike Seat which it not cheap but worth it. My experience day one: pure comfort, day 2: no padding, day 3: no chaff cream.  Use discount code BIKEPACK and see how much you save. The other parts I bought were the BarYak and a SON dynamos Hub with Supernova light brilliant.

Is Better To Build Your Own Fatbike.

For the people that don’t think they can build a bike by themselves. My thoughts on it are, even if you buy off a shelf bike. Over time, you upgrade the parts yourself, like seat brakes, tires, gears, etc. So you really don’t need a lot of experience, it’s like Lego. Installing the bottom bracket and stem headset, you can find a million how to videos on YouTube. By ordering parts yourself from online Aliexpress etc you save money and get what you want. After the build, just take it to a local bike shop. Get a check over service for peace of mind and to support your local bike mechanic. The best thing about building your own bike is…. you’ll have a better understanding of how your bike works. So the answer is HelL Yes, my girlfriend just finished building her first fatbike. I also started mine as I want to still ride while my bike is stuck in Australia. 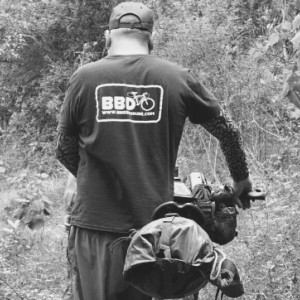 I’m Mark (Solo BikePacker) Welcome to my Site, I Love the adventure that Bikepacking & Bikerafting brings me I want to share what I’ve learned over the l years. In 2020, during lockdown, the Solo Website was born. It would be great to hear your thoughts and comments on my blog. I reply to all blogs comments and also on my Weekly Bikepacking Podcast. Cheers Guys.